Here are a few initial  notes on how I might begin to define ‘posthuman’ and ‘radical human’ in relation to my research (or the ‘post-human’ and ‘radical-human’).
the  radical-human/ the post-human and how they become apparent in the practices I am looking at:
in order to be ‘more-than’ human do we need to be ‘post’ human?
in order to be ‘post’ human we need to be ‘more-than’ human.
does post human = fully human and always ‘more than human’ or always ‘human +’
or always ‘human together with’/ ‘because of’?
is this ‘more than’ or ‘+’ or ‘together with’ the ‘radical’ part – the way of change and radical engagements with the world?
acknowledge that etymological root of radical is ‘go back to the root’
also, look further at the definitions of radical in relation to mathematics and chemistry
-----------------
In order to recognise the presence of the body in the definition of the posthuman, Hayles (in her book How We Became Posthuman, 1999) suggests “ not that the body has disappeared but that a certain sort of subjectivity has emerged.”(193). Her version of this subjectivity is one that exists at the “crossing of the materiality of informatics and the immateriality of information” (198). Sara Jane Bailes, in her book Performance Theatre and the Poetics of Failure (2010) also talks about newly emerging subjectivity in relation to experimental performance practice:
If aesthetic acts can expand our sense of perception as Jacques Ranciere (2006) suggests, then we should become aware of the significance of how such acts can induce novel forms of political and social subjectivity. (xx)
To continue her discussion about subjectivity Hayles then explores the term embodiment and finds this a valuable term for an extended understanding of  the meaning of ‘posthuman’:
Experiences of embodiment, far from existing apart from culture, are always imbricated within it. Yet because embodiment is individually articulated, there is also at least an incipient tension between it and hegemonic cultural constructs. Embodiment is thus inherently destabilising with respect to the body, for at any time this tension can widen into a perceived disparity. (197)
------------------------
Posted by ailsa at 13:21 No comments: 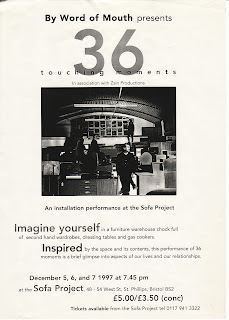 here is the press release for this performance:
Imagine yourself in a furniture warehouse chock full of wardrobes, dressing tables and gas cookers. Spend two months in the space, which is both strange and familiar and what ideas do you come up with?
This is exactly what  By Word of Mouth, a Bristol based company of performers and artists, have been doing and the result will be three public performances of on December 5, 6 and 7 at the Sofa Project.
The project is a collaboration between the theatre company and the Sofa Project, a charity which recycles donated furniture for sale to people on low incomes.
The performance is a series of 36 Touching Moments, also the show's title, and is inspired by the space and its contents and devised by the company.
The moments are a brief glimpse into aspects of our lives and our relationships which touch all of us at one time or another. It also includes dance, music, film and video and involves 21 people, including performers, technicians, the artistic director Max Holloway and choreographer Zahid Dar.
A very original performance in an extraordinary place. See it and you'll never look at a piece of furniture in the same way again. 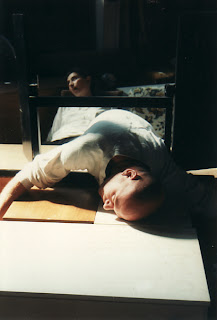 In and amongst lot of reading last week, a small piece of information has continued to return and pester my understanding and it seems particularly pertinent after the last (re)visitings entries:
the greek root of the word ecology is oikos which means house
and the definition of ecology in the Concise Oxford English Dictionary is: the branch of biology concerned with the relations of organisms to one another and to their physical surroundings.
This feels significant though I am not entirely sure why - it suggests that the study of  relations of organisms to each other and their environment might begin at home, with dwelling, with family, with community; yet this rather closed environment of house and home seems somehow to contradict the meaning of ecology as a wide multiplicity of connections, mutabilities and mutual dependencies.
--------------
With a nod to a future (re)visiting of performance and installation at Stapleton Road railway station, I was catching a train there last week and found this attached to the fence of a community garden which now takes up a disused part of the station. 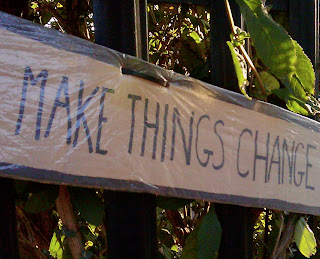 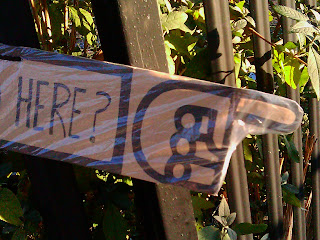 here are three extracts from Jane Bennett's The Enchantment of Modern Life: Attachments, Crossings and Ethics

these are the words of nanoscientist B.C. Crandall:

In watery solutions such as those found in the interior of most plants and animals, the general jostling caused by thermal excitation bumps protein sized molecules into each other from all angles very rapidly. This bumbling, stumbling dance allows molecules to explore all possible "mating" configurations with the other molecules in their local environment. By variously constraining and controlling such wild interactions, biological systems generate the event we call life. And it is exactly this mechanism of molecular self-assembly that may lead to the construction of complex structures designed by human engineers. (86)

Crandall and Epicurus together call to mind the Deleuzian claim that if one is to become otherwise than one is, one must place oneself in "molecular proximity" to alien bodies. One might, for example, try to explore one's nonhuman animality by experimenting with dogginess. Recall that for Deleuze and Guattari, becoming a dog is not merely a matter of imitation, but rather of making "your organism enter into composition with something else in such a way that the particles emitted  from the aggregate thus composed will be canine as a function of the relation of movement and rest, or of molecular proximity, into which they enter. "(86)

So what kind of ethical project emerges from a (meta)physical imaginary of animate matter, as distilled from the writings of Epicurus, Lucretius, nanotechnology and Deleuze?....
As Stephen White notes, an ontological imaginary does not "determine categorically" a specific set of ethical judgements but rather "helps engender certain dispositions toward an ethical-political life that alter the affective and cognitive direction one takes on specific issues" (87)
Posted by ailsa at 17:04 No comments: 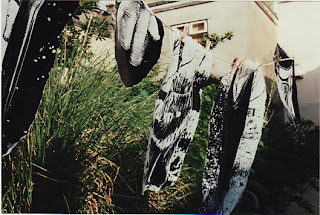 13 years ago 5 artists took up a residency in 1 Bloy St. Bristol - a condemned house on a condemned street - with the intention to make a performance. we worked by flashlight, in dark evenings behind eerily shuttered windows - it is freezing cold. we don costumes and play with dolls. we create acrobalances and hear a text spoken from the dark of another room. sometimes we write texts and share them in spattered sunlight. spring is coming and the abandoned gardens reveal hollyhocks, a shed full of aquariums and a house along the block infested with fleas. it feels anarchic and very convivial - we become a family, fictionally and otherwise. we are a family of children abandoned. we are also a company. we find a name -  by word of mouth.
other artists join us to make installations and we have a makeshift kitchen, a kettle and a video camera. 2 weeks before we are due to show our performance Molly leaves abruptly. life was too much, too busy. the performance couldn’t function without Molly and our performance material became transformed into installations  shown over a weekend open house in the summer. here you see details from my installations - entitled Dan Jenny Sally Molly and Dolly and  Precious 7 layers 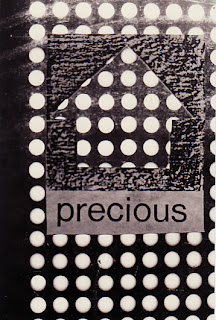 After many attempts at  trying to set up a website that would cost little and be easy to manage, I finally decided that I needed a simple web presence – one I could add to and edit really easily and would do what I needed it to at this time. So I have set up this blogspot and I have a specific use in mind for it, which is twofold:
Firstly, I want to digitally archive some images of my performances/installations from 1997 – 2009.
Secondly, I want to track my current PhD research by making simple entries about current thinking/reading. I’m not sure quite how the entries will take shape beyond the fact that each time I archive images from the past I will make an entry about what I am  researching presently. So the double function takes the form of two strands of research – one from the past and the other in the present. The revisitings of past performances/installations will be archived chronologically from 1997 onwards. Where will the resonances/crossings be between past and present research? What happens when the past meets the present?
Posted by ailsa at 22:15 No comments: